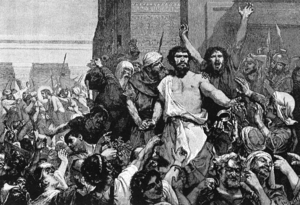 "Give us Barabbas!" from The Bible and its Story, 1910. (Photo credit: Wikipedia)

All four Gospels in the New Testament record the story of Barabbas, a notorious prisoner who was released as a favor at the Jewish Passover.   The Roman governor, Pilate, offered to free Jesus instead, but the politically motivated crowd chose Barabbas.  We don’t know what happened to this man after his release, but his story is a beautiful metaphor of the substitution which Jesus has offered me.  And so this poem is about me.  I am Barabbas.

I am Barabbas, a sinner in chains.
My heart is a prison of stone.
Guilty of murder and sentenced to die,
Unrepentant, desperate, alone.

The scrape of a key in the lock at my door
Sends chills through my feverish brain.
I tremble with fear at the specter of death.
I rage at the imminent pain.

What is this judgment: “Another shall die,”
And I shall go free in his stead?
Who is this sinner more hated than I,
Who bears such a price on his head?

Blinded by sunlight, awash in the crowd,
I hear them shout “Traitor!” and “Lord!”
They say he is chosen, a prophet of God;
They will give him a prophet’s reward.

He died like a king, forgiving them all,
Refusing the gall and the wine.
Could He see that his pain, the terror and shame,
Was mine – was all of it mine?

Three days he stayed in the prison of death,
And my guilt was only increased.
But the grave was undone by the Power of Love –
He rose, and we both were released.

I am Barabbas, freed from my chains.
For my crimes the Innocent died.
Redeemed in His name, forever I’ll serve
The Risen and Glorified.

4 thoughts on “I Am Barabbas”